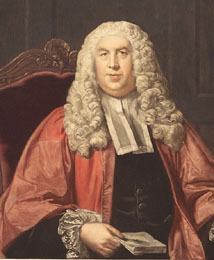 Sir William Blackstone’s Commentaries on the Laws of England (4 volumes, 1765-1769) became the foundation of university legal education in both England and in early North America. In his youth Blackstone was a student at Pembroke College, Oxford University, where he read classics, logic, and mathematics. After Oxford, in 1741, he studied law at Middle Temple, London becoming a barrister of Inns of Court in 1746. In 1743 he became a Fellow of All Souls College, Oxford University, where he delivered the first Oxford University lectures on English constitutional and common law.

Today the Blackstone Lecture is a main academic event of Pembroke College, attracting leading legal scholars from Commonwealth countries and the United States.